When I started writing Anomaly in 2014 I had an idea of where I wanted The Soul Prophecies series to go. I wanted to write about Arhl’s world and I had a vision for how the series would end. The series was always going to be a trilogy but half way through Anomaly I realised that I needed to explain Sophia’s story too. I wrote Hidden Variables as a prequel to Anomaly for that purpose.

Four years later and I have finished writing the series; I know where the story travels and its ultimate destination. Outlet Publishing offered me the release of a deluxe edition of Hidden Variables/Anomaly to include my science notes (Sophia’s journal) and suggested editorial changes to tie in with the rest of the series.

This was the perfect opportunity for me to make some changes to the original books and tidy up any loose ends. Thus Another Path was born.

Thank you all for your patience and for your continued support as well as all the kind reviews. I’m always overwhelmed, and motivated, by the positive feedback for my books and I’m looking forward to sharing my new work with you.

My signed perk from #p4a16 (project for awesome 2016) arrived today, and I was so freaking excited and happy. I opted for the signed John Green book perk when I donated some money to the p4a16 charity event back in December 2016. At the time John Green was on the charity livestream, and he was trying to find out if donators could choose which signed book they would prefer from his four popular novels. It became apparent that you couldn’t choose so it was a lucky dip with a 25% chance that you would get the signed copy of the book that you really wanted. John Green then went on to joke that his least favourite novel, though still well loved, ‘An Abundance of Katherines’ would probably be sent out as there would be more of them sitting unbought in warehouses, and insinuated that people would be unhappy about receiving one. I for one, cried out in dismay, because I wanted a signed copy of ‘An Abundance of Katherines’, it is the first John Green book I have ever read, and it is still by far my favourite even now that I’ve read all of his books.

So it had been four months and my book hadn’t arrived. I thought that maybe it had become lost in the post and I was a bit bummed about it but happy that my money had gone to a good cause regardless. Then in March I found out that they were just starting to send out the signed copies of the book perk and I waited some more, secretly hoping that the book I received would be ‘An Abundance of Katherines’. Then I woke up late, as I often do (my writing life), on Thursday 7th (today) and found an envelope outside my door. I immediately realised what it was and tore it open to find that my favourite John Green book was indeed inside! I was ridiculously happy and probably a little over excited by this fact, but I couldn’t believe that I had been lucky enough to receive the book that I had actually wanted (so badly). I still would have loved any of John Green’s novels, but ‘An Abundance of Katherines’ ranks in at top place for me. So thank you to John Green and thank you to all the volunteers and everyone behind the project for awesome event. I can’t wait for the next one! #dftba

P.S. sorry I haven’t posted much on here lately. For some reason WordPress doesn’t want to work on my laptop so I have had to type this post all on my phone! -C.L.

Click here to see my blog on book 1 in this series.

My Thoughts: Well I finished this book several months ago and due to busy times I haven’t been able to pick up book 6 yet. I’m going to keep this short and sweet, and if you want to know more about the series then I recommend hitting the link above so you can read my blog about book 1 in this series. END_OF_DOCUMENT_TOKEN_TO_BE_REPLACED

June updates for Diary Of A Young Writer include My Average Writing Day for anyone who is interested in knowing what it is like to work as a young writer, and in keeping with Halloween which is just around the corner, Writing Villains. Check out all my blogs at Diary Of A Young Writer by clicking here. As always, click on the blog pictures below to view the full blogs and please get in touch! I would love to know your thoughts and opinions :). 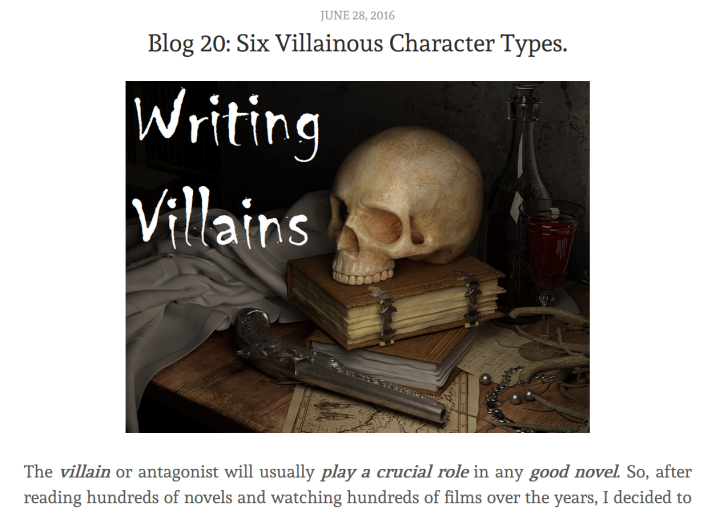 Blogging is only a small part of building a strong online presence, but it is very important, particularly for aspiring new writers. Even the famous authors like J.K. Rowling, Stephen King and John Green to name a few, all of them have excellent online presences. It’s no secret, and it’s proving to be very effective, authors are embracing the online world and communicating with their fans more now than ever. Sadly, the hermit lifestyle some writers aspire for is no longer realistic.

If you are writing a book or want to write a book then blogging and writing go hand in hand. New writers should be reading others books as much as possible. You will pick up techniques, styles and ideas from other authors, your grammar and vocabulary will improve too. You will also realise what reads well and what doesn’t. So since you’re reading books anyways, why not write a blog about them?

There are a number of book blogs out there, popular ones like The Indie View and The Write Practice, and some great ones I have come across like annathebibliophile and bibliopearl. There are lots of book related and writing blogs out there, so I recommend that you go and have a look at them.